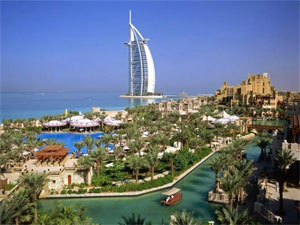 As one of the major city-emirates of UAE, Dubai has successfully established itself as one of the densely visited tourism destinations not only in the Middle East but in the rest of the world. Aside from its oil, UAE has also generated huge revenues from its tourism industry.

The number of tourists is consistently increasing. In fact, Dubai attracted 15 million tourists last year, while the capital Abu Dhabi had 2 million. The outstanding increase of tourist arrivals in Dubai is due to its tourism events such as the DSS or the Dubai Summer Surprises and DSF or the Dubai Shopping Festival and some other big events.

A recent report unveiled that GCC hotels had established 78,915 rooms along with 42,765 under construction and yet another 36,150 rooms in the planning stage. The number of hotels in UAE is expected to grow by 5.3% on its compounded annual growth rate: from 96,992 hotel rooms both in Dubai and Abu Dhabi up to 125,383 hotel rooms by 2016.

There are many new hotels to be built to prove to the world that Dubai deserves to host the Expo 2020. Managing Director of STR Global, Elizabeth Winkle, reported to Gulf News that the emirate is a very popular destination for both corporate and leisure travels. She said that as of January 2013, the state of Dubai already had 56,423 rooms currently available to accommodate huge number of visitors.

The main question she pointed out was whether such tremendous event can encourage more significant increase knowing that Dubai offers a welcoming visa policy which makes the place highly accessible for tourists. Furthermore, Winkle said that the MICE or Meetings Incentives Conventions and Exhibitions, had given so much emphasis in the previous year driving about 20% to 30% of the tourists visiting UAE.

Oxford Economics prepared an Economic Impact Assessment report and it revealed that the Dubai World Trade Center had contributed Dh6.5 billion in the year 2011. In the same year, excluding corporate meetings, exhibitions and incentives, Dubai became a successful host of 34 international events.

According to Abu Dhabi Tourism, MICE events in Abu Dhabi are expected to grow by 7% annually and it is also expected to generate Dh5.1 billion by the year 2020. The entire contribution of the capital state in the country's tourism industry amounts Dh2.4 billion.

The Dubai Shopping Festival is the reason why the modern Dubai is now the global brand of all sorts. Its month-long shopping festival, January to February, has been attracting millions and millions of tourists from all over the world. After the festival, yet another entertaining and shopping festival is conducted during summer and it is the Dubai Summer Surprises. These kinds of events play a vital role in boosting the tourism industry of Dubai and eventually the country's economy.