Cruise Awards – Friends and Enemies of the Environment

Friends of the Earth, an environmental association, has released their 2012 Cruise-Ship-Report-Card, grading 15 key cruise lines and more than 140 cruise ships for their impact on air and water pollution. 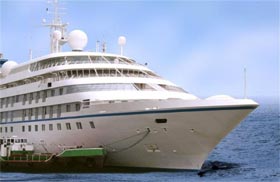 The tremendous quantity of food and drink devoured on cruise ships, including water from medical services, laundry, spas, pool, and dry cleaning locations need an outlet. Unfortunately, the sea is the wasteland for the majority of these services.

According to the U.S. Environmental Protection Agency, a cruise ship with several thousand passengers accumulates over 200,000 gallons of refuse each week. A single cruise ship is equivalent to fifty swimming pools of vastly polluted litter that is discarded into the oceans every week!

This occurs because of the systems utilized to rid the ships of passenger's waste. For instance, at sea whatever is purged from toilets is literally dumped "as is," into the ocean to infect marine life, as long as the cruise ship is a minimum of three nautical-miles from shore.

In order to come to a consensus on which cruise lines are the worst offenders, there are three environmental factors considered: water quality fulfillment, pollution diminution, and sewage management. Recently, the Friends of the Earth's third yearly report card honored Disney Cruise Line with an "A" grade, its very first. The association concluded that all Disney ships incorporated superior sewage treatment-systems and several of them are outfitted to receive shore supported power permitting them to disable their on board diesel-engine producers.

The largest fleet of cruise ships belonging to Carnival Cruise lines did not fare too well. Even though they are up from an "F" rating in 2010, they only moved up to a D+ due to their old sanitation systems, old technology deficient of filters and the ability to eliminate noxious waste.

Specialists assert that over 200 ships around the world present a hazard to marine life with their gargantuan amounts of waste and sewage including a momentous quantity of dirty water from showers, sinks, laundry, and kitchen use, that is emitted straight into the sea.