THE FUTURE IS BRIGHT FOR INDIA'S TOURISM

India is expecting a boom in its tourism sector within the next five years. According to government projections in its 12th Plan for 2012-17, the tourism sector should grow by at least 12 percent. 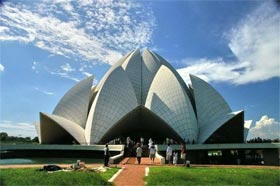 Authorities are banking on this growth to compensate for deficits in other slower sectors of the country's economy. This is documented in a White Paper that the government released recently in which it also promised to adopt responsible tourism that will bring the benefits of tourism to the people in the grassroots.

Between 2007 and 2012, the paper reported, India's tourism sector has grown at an average rate of 8.1 percent annually, which is higher than the expected 7.9 rate in economic growth in the 11th plan for 2007-12. Forecasts for the 2011-2021 period show that tourism will grow by 8.8 percent. The agricultural, manufacturing and services sectors will grow at four percent, eight percent and 9.1 percent respectively.

According to the WTTC, a stakeholder in global tourism, India's tourism sector has the highest potential for growth between 2009 and 2018. However, the sector is yet to reach its highest potential and contribute significantly to the overall growth of the country's economy. It is expected that significant improvement will be achieved through developing and promoting tourism infrastructure, marketing and social awareness campaigns, capacity building for tourism services providers as well as enabling India to compete favorably with other top tourism destinations around the world.

Efforts to step up marketing of India as a tourism destination, the paper added, are necessitated by the decline in India's global ranking with respect to marketing and branding effectiveness between 2006 and 2010. During the 2004-05 to 2010-11 periods, tourism grew at a rate of 2.04 percent annually.

The paper further advocates a pro-poor tourism policy that aims to improve people's lives by trickling down the benefits of tourism to poor communities. Citing a responsible tourism model in Kumarakom, Kerala that benefits self-help women groups at the grassroots, the paper said more can be achieved through building capacity to expand opportunities in such communities.