On Tuesday, 8 Jan, Spain finally launched the new high-speed rail line which operates from Barcelona. This new development was well received by many people with officials making positive comments and predictions that it will improve passenger connections especially to France while at the same time significantly boosting the economy. 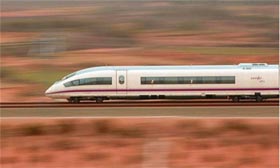 Artur Mas, president of Catalonia region, Spain's Prince Felipe, and Mariano Rajoy, the Prime Minister, were amongst the first to ride on this new rail line that linked Barcelona to Girona and Figueres which is next to the French border.

Although this new stretch of rail line is a little short at 80 miles (131 kilometers), good news is that it is actually part of the border project to link both the Spanish and French high speed tracks transversely over the border.

The Spanish government also made a statement saying the link up is due for completion by April and is expected to take passengers directly from Barcelona and several major French cities without necessarily having to change trains as well as cutting on the time spent during the whole journey especially on major routes.

While addressing the press in Girona, Prime Minister Rajoy said that this was actually a strategic route that was aimed at serving as an axis of prosperity not only for Catalonia but also for Spain and the rest of Europe as well. He went on to term the new rail line to be "amongst the most significant and ambitious planned works in the country".

The Spanish government was very optimistic that this new $4.8 billion (3.7-billion euro) stretch of line was going to shave off at least an hour from the normal travel time between Paris and Barcelona while at the same time serving as a major boost to the domestic economy.

All passengers will now have an opportunity of traveling from Barcelona to Paris in just six hours thirty minutes, and from Paris all the way to Madrid approximately in 10 hours although this would still involve having to switch to a new train at the Figueres which is very close to the border.

The Spanish government also revealed that this new section of rail line actually made the new length of the active high speed rail line for Spain reach the 3,000 kilometers mark hence becoming the second largest network after China's.