ALMATY. KAZINFORM - Mayor of Almaty Akhmetzhan Yessimov has received a delegation of the Republic of Turkey headed by Deputy Economy Minister Adnan Yildirim, the press service of the city administration reported. 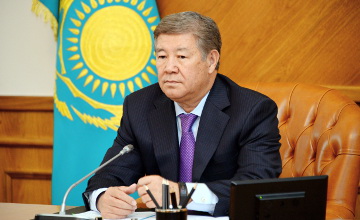 Mayor noted the positive dynamics of cooperation between the metropolis and Turkey. Thus, trade turnover between Almaty and the Republic of Turkey in 2014 increased by 10% and amounted to $550 million. The city was visited by over 26 thousand Turkish citizens. There are 154 joint Kazakh-Turkish enterprises and 513 enterprises with Turkish capital in Almaty city.

"Relations between the two brotherly countries reached a new stage of sustainable development. Almaty and Istanbul are the twin cities. Interaction and cooperation is not limited to trade and economic aspects, in of our city successfully operate Kazakh-Turkish high schools etc.," said A.Yessimov. He invited Turkish businessmen to participate in a number of priority investment projects of the metropolis.

In turn, Adnan Yildirim also emphasized the high level of relations between Turkey and Almaty and thanked Yessimov for a warm reception.

It should be noted that Kazakh-Turkish business forum kicks off in the city of Almaty tomorrow.