Up to three thousand Kazakh tourists annually visit Jordan with facilitated visa regime due to its developed medical tourism and the most famous holy places. The Ambassador Extraordinary and Plenipotentiary of Kazakhstan to Jordan, part-time - in Lebanon and Palestine Bulat Sarsenbayev has said about that in an interview with "Kazinform" INA during the official opening of the street in Astana, named in honor of the former Jordanian King Hussein Bin Talal. 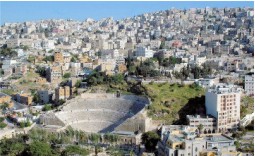 We remind that the ceremony took place on May 20 this year.

"Three thousand Kazakhs annually visit Jordan, which is one of the major tourist centers in the Middle East with its developed medical tourism. In 2007, King Abdullah II after his visit to Kazakhstan has issued a Decree on the issuance of visas on border to our citizen that is facilitated regime. Visa processing time upon arrival at the airport is 15 minutes and you can get permission to stay in Jordan to 1 month "- B.Sarsenbaev said.

In addition, the Ambassador noted that the total number of visitors for this cluster is 250 thousand tourists per year. Medical centers equipped with modern equipment have medical specialists educated in Europe, USA and CIS countries, so there are many Russian-speaking physicians. As for overall tourism, such historic sites as the Temple of Petra, Jerash, Baptism Site of Jesus Christ are attractive.

"Therefore, I advise Kazakh tourists to visit friendly Jordan with its access to the Dead Sea and known around the world for its medical clusters", - the Ambassador said.

In addition, the Embassy of the Republic of Kazakhstan to Jordan is investigating the feasibility of the establishment of a direct air link from Kazakhstan to Jordan. Amman Mayor Akel Biltaji, former General Manager of the Royal Jordanian Airlines participates in these negotiations.

"Direct flight to Jordan would take only 4.5 hours, so many problems on visiting of holy places by Kazakhs both in Israel and Palestine are withdrawn" - said B.Sarsenbaev.

Meanwhile, the number of visitors from Jordan to our country on business visas is increased; travel companies of that country have attend International Tourism Exhibition in Almaty for several years. Kazakhstan, in its turn, has also set visa facilitation for Jordanian.

"Jordan citizens may contact the Embassy of Kazakhstan anywhere without special invitations and get 1- month visa within 1-2 days", - the Ambassador assured.