Fiji to open consulates in Kazakhstan

The Republic of Fiji plans to open honorary consulates in the RK, BNews.kz reports referring to the press service of the Committee of Tourism Industry of the Ministry of Industry and Innovative Technologies of Kazakhstan. 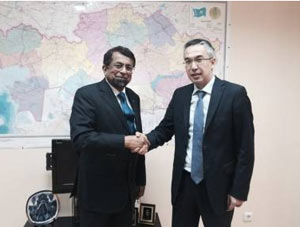 "The Chairman of the Committee, Marat Igaliyev, has met with Ravindran Robin Nair, the Extraordinary and Plenipotentiary Ambassador of the Republic of Fiji to Kazakhstan. During the meeting, bilateral cooperation in the field of tourism was discussed", the press service informs.

The representative of the Pacific island nation stated that the Republic of Fiji is planning to open its consulates in the northern and southern capitals of Kazakhstan.

The two leaders also discussed Fiji's experience in encouragement and promotion of investments into development of tourism facilities in the two countries, in particular in regard to addressing double taxation, revision of tax rates and projects in special tourism economic zones.

The Kazakh side invited the representatives of the National Tourism Administration of the Republic of Fiji to the Astana Economic Forum and EXPO-2017. The Fijian side, in turn, invited their Kazakh counterparts to visit the Asia-Pacific Regional Development Forum due in June.